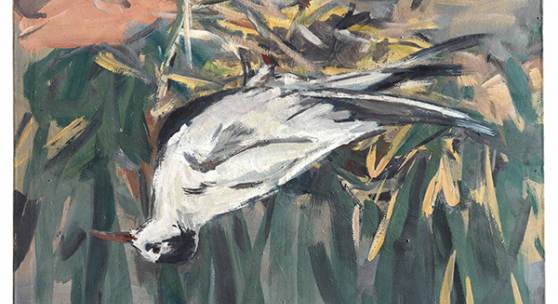 Georg Baselitz’s Trauerseeschwalbe (Black Tern, 1972) is an early example of his upside-down compositions. The painting is also one of his first works executed with the innovative technique of finger painting that encourages the viewer to engage with the work’s tactile quality. Using dramatic strokes of green and gold to suggest a swamp, the bird’s feathers are created with bright layers of white and grey suggesting a downy plumage. The bird motif, with the imagery and the symbolic meanings that have historically been associated with it, is central to Baselitz’s art and can be related to his early experience as a wildlife photographer’s assistant in Saxony.

Sigmar Polke’s fascination and experimentation with photography dates back to his student years at the Düsseldorf Art Academy, when he started working with a handheld 35mm Leica camera. In 1974 he travelled to Pakistan and Afghanistan and used the pictures from this trip as the basis for a number of key photographic works and paintings. Although he experimented with a wide range of styles, subject matters and materials throughout his career, photography remains one of the main aspects of Polke’s work and a way to expose the codes and structures of image-making.

Carved out of black Indian granite, Wolfgang Laib’s Brahmanda (Egg of Brahma in Sanskrit, 2016) reference the very first work of art the artist created, when he discovered a large black rock in a stone quarry near his home in southern Germany in 1972. A medical student at the time, he had just returned from three months in India. Forty-five years after this seminal gesture, the Brahmanda remains key to understand his practice. If the shape symbolizes the regeneration of the world, it also challenges the notion of authorship and subjectivity usually associated with artistic creation.

Yan Pei-Ming often bases his paintings on iconic images drawn from visual culture, notably art historical canons. Reworking Manet’s masterpiece in variations of grays, his version of Déjeuner sur l’herbe (2017) stresses the uncanny atmosphere of this pseudo-idyllic scene. The presence of skulls in the forefront situates the painting in the tradition of the vanitas. The pictorial means developed by Ming over the years serve here a more interiorised work, the strength of which lies in the ambiguity between abstraction and figuration.

We are also delighted to participate in the new On Site section at the Petit Palais with a group of new sculptures by Erwin Wurm. Presented on used crates instead of pedestals, the small human figures of the so-called Verschnittskulpturen (Cut-figures, 2017) series further investigate the abstracted and fragmented body. Made of bronze and painted white and pink, the sculptures embody the tension inherent to the transformation of a performative action into a long-lasting pose. Here the sculpture represents the synthesis of opposing forces, both physical and emotional, traditional and surprising.