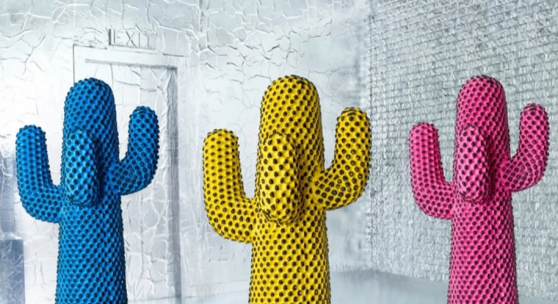 Milan, 28 March 2022 - The collaboration between Gufram and Andy Warhol is the transcription of the greatest pop artist’s vision into one of the most eccentric design icons of all time. A nonconformist who defied convention and forged his own pathway, the artist used the language of popular culture to transcend common ideas into sophisticated concepts - an ethos that is very much reflected in Gufram’s work. ANDY’S BLUE CACTUS®, ANDY’S PINK CACTUS® and ANDY’S YELLOW CACTUS®, each produced in a limited edition of 99 pieces, are the perfect translation of Andy Warhol’s prints into prickly design multiples.

Just like the other CACTUS® versions, the ANDY WARHOL x GUFRAM edition, presented on the 50 year anniversary of the world-recognised hall tree, is made from the original 1972 mould, and sculpted and hand finished by specialised artisans, making each piece unique. The 2,165 polyurethane bosses (give or take a few) that characterise the surface are then painted with Guflac®, Gufram’s patented paint that makes the surface look like leather, while still allowing it to remain flexible and soft.

The collaboration between Gufram and Andy Warhol feels so right that it’s almost absurd that it has never happened before! Finally the pop art genius encountered CACTUS®, the most pop design icon” states Charley Vezza of Gufram. “We started off imagining how Warhol could have depicted the CACTUS® and then we created the 3D version by working with a trio of typically Warhol colors and highlighting their tips with black, just as in one of the artist’s screenprints. Three different CACTUS® were born, each completely finished by hand by Gufram’s artisans, thus making every piece unique. The more I look at them the more I imagine Andy entering the Gufram lab in 1970s Turin and exiting with a product just like this one… or maybe not!”
The new limited editions of CACTUS®, prickly, full of character and definitely a head turner, are a celebration of the values by which the Foundation stands: supporting works that are challenging in nature, promoting freedom of artistic expression, and valuing experimental artistic practice. Just as Warhol’s creative vision knew no boundaries and continues to inspire each new generation of creatives, at the same time the CACTUS® is also a confirmation of Gufram’s avant-garde mindset, its desire to push the limits of industrial design, its nonconformist experimentation linked to aesthetic, technological and material research, and its Radical Design spirit.

During the Milan Design Week, from Friday, June 3rd to Sunday, June 12th, La Triennale di Milano will host the celebrative exhibition “50 Years of Being a Cactus” dedicated to the three new editions of CACTUS®.