Final report of the 11th edition of Design Miami/ Basel 2016 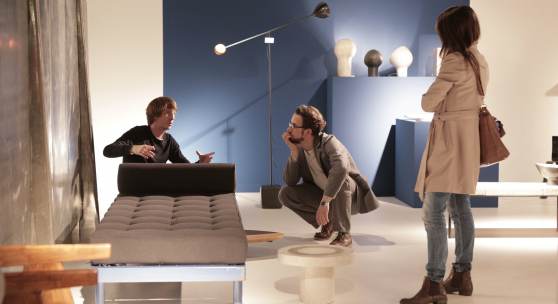 Basel, June 22, 2016: In its 11th edition, Design Miami/ Basel closed on Sunday, June 19 with record sales and attendance, particularly of collectors and museum curators. Design Miami/ Basel exhibitors showcased their strongest and most diverse booths to date, highlighting depth of knowledge and years of experience in their specific areas of expertise and showcasing the diversity of collectible design.

Lee Mindel of Shelton, Mindel & Associates commented the following on Design Miami/ Basel 2016, "It was an extraordinary experience. Not only was the Basel venue spacious, beautifully designed and carefully curated - it also felt optimistic in a time of political upheaval and social change. This year’s event will be remembered as a game changer as it was about celebrating the past, working in the present and looking towards the future. For example, at Galerie Jacques Lacoste we were able to experience a space designed by Diego Giacometti, it wasn’t an object but a space in a library that he created. Carpenters Workshop Gallery exhibited many current artists and imaginative uses of new materials including resins and curved lighting strips. At Dansk Møbelkunst, a relatively unknown modernist architect, the late Palle Suensen, demonstrated the unique relationship between the Danish cabinet maker and the architect with his slatted wood bench; his brand of organic modernism was found in a pair of sconces whose perimeter baffle resembled the petals of a flower."

"It was a year of looking and learning that touched us all, a year not to be forgotten."

Gallery Highlights/
Each year, the best in contemporary and historical design come together at the fair; the 2016 edition of Design Miami/ Basel included 46 of the world's leading authorities in collectible design, who enjoyed robust sales and an opportunity to connect with a particularly international array of collectors, curators, critics and influencers. Design Miami/ Basel Executive Director, Rodman Primack, stated: "We have been especially pleased this year with the diversity and high quality of collectible design work exhibited at Design Miami/ Basel. The fair has always been a destination for private collectors, museum curators, and aficionados of design and architecture but this year’s selection was considered by many to be of an even higher quality than previous years."

"The presence of a number of top design collecting institution curators on the show floor throughout the week has certainly underscored the sense that Design Miami/ Basel is a place to encounter the most important work in the market, a number of notable works make this clear."

/ Galerie Jacques Lacoste/ Diego Giacometti, Chambre a Livres
Marc Barbezat, famed publisher of existentialists like Jean Genet, commissioned Diego Giacometti in the late 1960s to create this extraordinary bookcase for his home. Giacometti holds a particularly strong place in the market and this piece captures all the hallmarks of his work, its rarity and provenance unparalleled.

/ LAFFANOUR - Galerie Downtown/ Jean Royère, Ours Polaire
The Ours Polaire chairs are possibly the most recognizable of all Royère pieces; this pair is particularly special due to the color and upholstery, which is most likely original. The nails that pierce the upholstery throughout are consistent with those used in the original production — similar pairs at auction have recently sold for over half a million dollars.

/ Galerie Patrick Seguin/ Jean Prouvé, Maxéville Design Office
Patrick Seguin has worked for two years to restore this important structure, which was Jean Prouvé’s personal design studio in the early 1950s. The building had been forgotten and subject to a variety of fates, but luckily remained virtually intact until Seguin discovered it.

/ Demisch Danant/ Pierre Paulin, Élysée Bookcase
Pierre Paulin was commissioned to redesign a number of rooms at the Palais de l’Élysée, the official residence of the President of France, for Georges Pompidou in the early 1970s, resulting in some of the most iconic design work of the time. Made of a then high-tech acrylic resin called Altuglas, this futurist Élysée Bookcase is thought to be one of only two that were ever made, the original of which is now part of the permanent collection of Le Mobilier National.