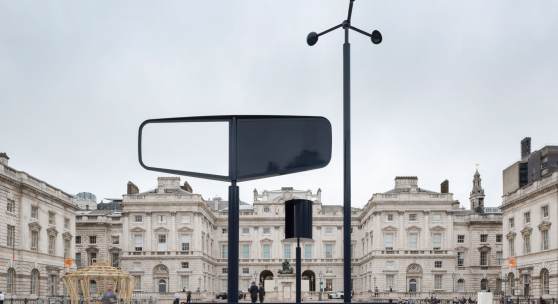 Designers Edward Barber & Jay Osgerby have worked closely with the V&A, the world's leading museum of art and design, to create Forecast - a wind powered installation supported by British Land. Representing the UK at the first London Design Biennale 2016, Forecast installed in the central courtyard at Somerset House until 27th September.

Measuring 14 meters high and weighing seven and a half tonnes, the installation built by Litestructures, with engineering by Arup, is comprised of a combination of steel, aluminium and carbon fibre. Forecast responds to the Biennale’s theme of ‘Utopia by Design’ and was inspired the UK’s pioneering advances in wind energy with the installation evoking an image of wind turbines and weather stations. Movement is triggered as the wind picks up or changes direction, creating a simple kinetic sculpture that responds to the elements.

Edward Barber & Jay Osgerby said;
"We are excited about representing the UK in London’s first ever design biennale. The question of utopia, this year’s theme, is an increasingly captivating while intangible notion in our time.

It seems this year, more than in recent years, the world around us has changed, shifted, in ways unpredictable and away from the idea utopia. We hope Forecast contributes to a positive dialogue within the biennale, the design community and beyond".