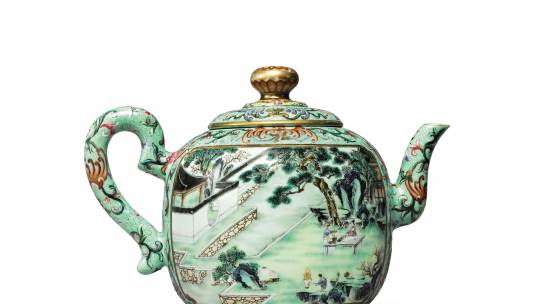 NEW YORK, 14 September 2016 – Over the course of two days, Sotheby’s New York sales of Chinese Art brought a total of $14,748,350 – well over the $7.4/10.8 million estimate. The auction was led by a series of outstanding results for rare objects that drew up to a dozen bidders, driving prices to multiples of the high estimates. A teapot, from a private American collection, soared over its $300/500,000 estimate almost immediately, before selling for $3.5 million, while a Gilt-Bronze Figure of the Dali Lama also eclipsed its $80/100,000 estimate to fetch $1.5 million. The various-owner sale of Important Chinese Art brought $12,246,850 and followed the ‘white-glove’ sale of Chinese Art Through the Eye of Sakamoto Gorō: Early Chinese Art, which achieved $2,501,500.

Angela McAteer, Head of Sotheby’s Chinese Works of Art Department, New York noted: “The contest amongst more than ten bidders that pushed a 250 year-old teapot to $3.5 million reminded us of auction’s unique magic. The piece, having been enjoyed by an American collector for decades, was just one of a number of works that soared over pre-sale expectations after drawing bidding from determined collectors. As we saw throughout our two days of sales, the Chinese Art market remains robust, with major collectors deeply engaged in owning the finest examples of the country’s artist heritage.”

The undeniable highlight of the sale was a Rare Turquoise-Ground Famille-Rose ‘Hui Mountain Retreat’ Teapot and Cover, Qianlong Seal Mark and Period, which sold to a packed salesroom for $3,490,000 (estimate $300/500,000). Chased by multiple clients in the room and on the telephone, the bidding began at $250,000 before quickly jumping to $1 million and selling to applause for the final price. This wonderful work of art, one of only two known, is an ode to Emperor Qianlong’s adoration of tea; the front features a figure, possibly the Qianlong Emperor, being served tea while admiring an open handscroll. The reverse is an imperial poem, entitled Jihuiquan peng zhulu ge (Brewing Tea by Hui Swing), written by the Emperor himself following a visit to the Hui Spring during his Southern Inspection Tour.

A Gilt-Bronze Figure Depicting Ngawang Lobsang Gyatso, Dalai Lama V led Sotheby’s offerings of devotional works of art, selling for $1,510,000 (estimate $80/100,000). Acquired in Turin, Italy in the 1960s, this Tibeto-Chinese portrait from the 18th Century depicts one of the most significant personalities in Tibetan political and religious history. The attention to detail, from the molding of the face and figure, to the embroidery of the Dalai Lama’s robes, is particularly fine. The artist also pointedly added a pointed moustache and receding hairline to the gilt-bronze figure, two distinctive features of Ngawang Lobsang Gyatso.

Throughout the sale, bidders from around the world sought the finest ceramics and porcelain. A Pair of Rare Wucai and Doucai ‘Dragon and Phoenix’ Bowls, Yongzheng Marks and Period flew above its high estimate of $80,000, fetching $874,000. The meticulous painting of the dragon and phoenix design, a reinterpretation of a motif that originated in the Kangxi Period, added to the desirability of these works of art, of which only two others are known to exist. A Very Rare Portuguese Market Blue and White Bottle Vase (Yuhuchunping), dated 1552 with Jiajing Mark and Period sold to applause for $418,000 (estimate $120/150,000). Belonging to a group referred to as the ‘Jorge Alvarez bottles’, a very significant and rare group of vases, its companions reside in distinguished museums and galleries around the world, including the Victoria and Albert Museum in London, the Walter’s Art Museum in Baltimore and the Musée Guimet in Paris.

In addition to ceramics and porcelain, a Large Gray Stone Figure of a Seated Lion from the Northern Wei Dynasty tripled its low estimate of $60,000, selling for $212,500. Belonging to a special group of sculptures that were placed at the entrances to important tombs, this spectacularly-carved lion also carries a distinguished provenance. Purchased by J.T. Tai from Galerie C.T. Loo & Cie in Paris, before being sold at Sotheby’s New York in June 1985, the present lot appears alongside the daughter of C.T. Loo, standing in her father’s gallery, in a photograph owned by the Freer Gallery of Art in Washington D.C.