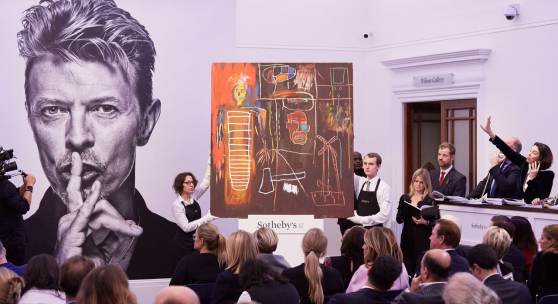 “David Bowie’s personal art collection captured the imagination of the tens of thousands who visited our exhibitions and the thousands who took part in the sales. Sotheby’s is truly honoured to have had the opportunity to share this collection with the world and, in doing so, offer a fresh insight into the creative mind of one of the greatest cultural figures of our time.”-- Oliver Barker, Chairman, Sotheby’s Europe

Facts and Figures
 Global exhibitions seen by 55,870+ visitors
 London Exhibitions in July and November had a total of over 51,470 visitors – the highest
attendance for any pre-sale exhibition in London
 Over 26,500 people watched the sales online
 Over 1,750 people attended the sales
 Over a thousand bidders registered through our BIDnow programme, powered by Invaluable
 Please see “Bowie/Collector by numbers” below for full details

A spokesperson for the Estate of David Bowie said: “David always enjoyed sharing the works in the collection, loaning to museums and actively supporting the art and artists that were part of his world. While the family have kept certain pieces of particular significance, now was the time for others to share David’s love for these remarkable works and let them live on.”

IN DEPTH: COLLECTIONS WITHIN THE COLLECTION
“Bowie was drawn to the art for which he felt a profound personal connection, collecting with great intellect and passion. Alongside the sensational results for the better-known artists, there was equal enthusiasm from collectors for the quieter, hidden-gems of Modern British art which he so loved and championed.” - Simon Hucker, Senior Specialist in Modern & Post-War British Art
“Bowie’s passion for the artists in his collection has introduced a worldwide audience - and a whole new generation of collectors – to Modern British Art. From Lanyon to Gilman, from Barns-Graham to Tillyer, we’ve seen a truly remarkable succession of records over the course of the last two days, as collectors from every corner of the globe responded to the vision and intellect of Bowie as a collector.” - Frances Christie, Head of Department Modern & Post-War British Art

CONTEMPORARY ART
 Jean-Michel Basquiat’s “Air Power” was the top lot across all the sales. Eight bidders drove the work to £7.1m (est. £2.5-3.5m, lot 22). Bowie played the role of Andy Warhol in the 1996 film “Basquiat” around the time he purchased the work. In the same year, Bowie wrote a feature on the artist for Modern Painters magazine, illustrated with “Air Power”.
 Hirst was one of only a handful of high-profile contemporary artists for whom Bowie publicly expressed his admiration. Two spin paintings soared over estimate, including “Beautiful, hallo, space-boy painting” which Bowie created with the artist in 1995 that sold for £785,000 (est. £250,000-350,000, lot 5).