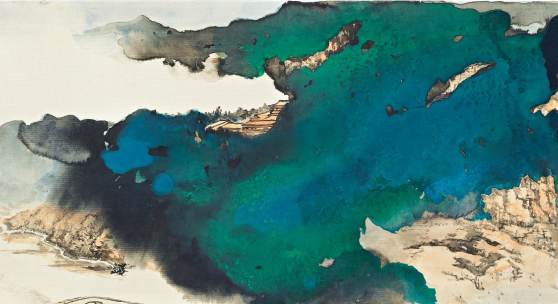 Today’s Auctions Led by A Master Landscape by Wang Yuanqi Sold for $1.2 Million

The day began with an auction dedicated to the collection Tang Hung and Fung Bi-Che – two students of the modern Chinese ink master Zhang Daqian. The collection achieved $4.8 million, well in excess of its high estimate of $3.1 million, and with a strong 84.4% of works sold. The collection was led by one of Zhang Daqian’s iconic splashed-ink landscapes, Bridge to Mountain Temple Shrouded by Prismatic Clouds in Splashed Color from 1981 which fetched $915,000 – more than three times its high estimate of $280,000.

Sixteen works by Zhang Daqian were sold from the collection, including a number of pieces that illuminate his close relationship with his former students. In Invitation to Visit, Zhang Daqian invites Tang Hung to join him in the mountains depicted within the landscape. The work, which sold today for $567,000 (estimate $200/300,000) is inscribed: “Last fall, I acquired this striking view of the Northern Mojie Mountain and thought how pleasant it would be to have a dwelling here. I did not have a chance to materialize this vision, I painted it instead. Would you, my very dear friend [Tang Hung], like to join me here to enjoy the serenity of this land?”

The various-owner auction of Fine Classical Chinese Paintings & Calligraphy was led by Wang Yuanqi’s Landscape of Yushan, a hanging scroll dating to the 1689 that brought $1.2 million (estimate $1/1.5 million). The work had remained in the Roy and Marilyn Papp Collection – one of the finest private collections of Chinese paintings remaining in the United States. Works by Zhang Daqian continued to perform well throughout the various-owner sale, including his Dancing Lotus that sold for $375,000 (estimate $220/400,000). The piece appeared at auction from the collection of Carl and Lena Ma – as an airline executive, Mr. Ma met and assisted Zhang Daqian in transporting his paintings around the world. In gratitude of their friendship, the artist invited Mr. Ma and his family to his studio where, in 1973, he gifted and dedicated the work to his friend.

Regarding today’s results, Xian Fang, Head of Sotheby’s Classical Chinese Paintings & Calligraphy Sales in New York, commented: “Even in a very selective market, we were able to source rare and extraordinary pieces from private collections worldwide to meet buyers’ demand today. The very successful sale of the Tang Hung and Fung Bi-Che Collection proved once again that North America is still an important source for collectors to find pieces that are fresh-to-the-market.