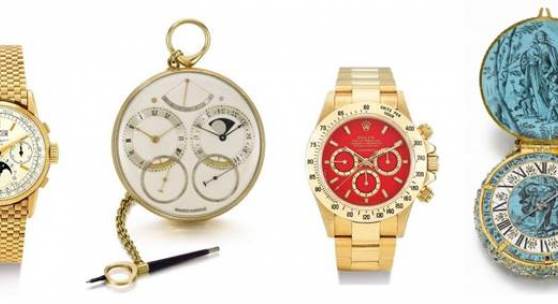 RECORD YEAR FOR WATCHES AT SOTHEBY’S
Highest Annual Total in the Company’s History Auction Sales Top $109 million *Up 22% on 2018*
Driven by Record Prices, including for An Independent Watchmaker and An English Watch $4.6m for George Daniels’ Legendary “Space Traveller I”
Landmark “Masterworks of Time” Collection Generates Enthusiasm among International Collectors

“This has been an historic year for our team, reflective of the ever-growing fascination with watches around the world. Propelled by the sales of exceptional property, careful sourcing and fast-expanding online sales, these results prove that, for many collectors, watches transcend the pure function of timekeeping. The appearance of masterpieces by horological pioneers, such as George Daniels’ record-breaking “Space Traveller”, also has a spin-off effect on all levels of the market, bringing people to fully appreciate the vision, tradition, exceptional craftmanship and technical prowess that can be found in a watch.
Sam Hines, Worldwide Head of Sotheby’s Watches

“A collection such as “Masterworks of Time” is a barometer for the market, showing a deepening of appreciation for rare watches. I have had the privilege to present many of the masterpieces in the collection over the past decades, over 30 years ago for some of them, and it is fantastic to see that the excitement met by a small group of educated collectors then, has now spread to a much larger, global and transgenerational audience. As we prepare to celebrate Abraham-Louis Breguet in the third sale dedicated to “Masterworks of Time” next year, we look forward to many more opportunities to share our passion with collectors.”
Daryn Schnipper, Chairman of Sotheby’s International Watch Division

The Continued Growth of Online Sales
56% of the lots sold online, four times more than five years ago
80% of the bidders participated online
65% of the buyers placed their winning bids online (up 20% over last year)
The proportion spent online has more than tripled in the past five years. This year, it was up 22% over 2018
Top Watch sold online set an auction record for a Millennium wristwatch by George Daniels: a Millennium in yellow gold from 2000 sold for US$ 289,800 in Hong Kong in April (pictured right)
Online-only Sales have doubled in value since 2018. Many of these were driven by innovative thematic and partner sales. For example, in February, an IWC Big Pilot’s watch that was worn by Oscar nominee Bradley Cooper while attending and performing at the 91st Academy Awards ceremony, sold for $75,000 (pictured left). Proceeds went to the Antoine de Saint-Exupéry Youth Foundation.