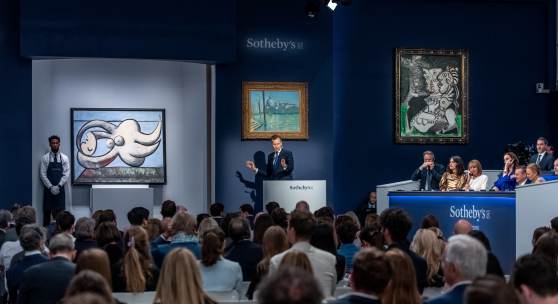 Paul Cézanne's Clairière (The Glade) Sells for $41.7 Million, Pushing Total for Trio of Works from Toledo Museum of Art to Nearly $60 Million

"The two titans of modern art – Pablo Picasso and Claude Monet – squared off tonight as the standard-bearers for the market and the foundation for another record-setting night at Sotheby’s. Both works sold tonight showcased the artists at the height of their powers, with each representing a distinct moment of transformation that would play a pivotal role in defining their respective careers.” - Brooke Lampley, Sotheby’s Chairman & Worldwide Head of Sales for Global Fine Art

“The total realized tonight was testament to the enduring demand for Classic Impressionist and Modern works from our global collectors. We saw strong prices across the board for works by the giants of Modern art, from Monet and Cezanne through to Modigliani, Matisse, Picasso, Giacometti and de Kooning – a testament to the continued stature of this artistic period in the international market.” - Helena Newman, Sotheby’s Worldwide Head of Impressionist & Modern Art

“Since we first initiated our expanded scope of offerings for the category, placing them alongside the historic forebears who inspired them, we’ve continued to see the market expand in new areas that complement this holistic mindset. Among them is Surrealism, which had another great night tonight, setting new artist benchmarks and spotlighting the ways in which Surrealism took shape around the world, from Europe to Latin America to America. The sale was also buoyed by an enthusiastic response to abstract masterworks by Willem de Kooning, Philip Guston, and others” - Julian Dawes, Head of Modern Art, Sotheby’s New York