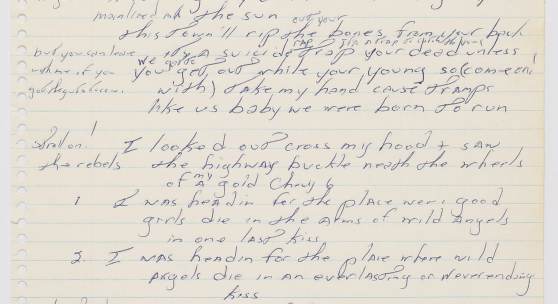 20 APRIL 2018; This June Sotheby’s will present a handwritten working manuscript of “Born to Run,” the Bruce Springsteen smash that became an essential American anthem. The 1975 hit catapulted ‘The Boss’ to mega-stardom and remains a beloved classic, having been ranked as the singer’s greatest song by Rolling Stone Magazine in 2013, used by the artist as the title of his 2016 autobiography, and featured as the finale to the current sell-out show ‘Springsteen on Broadway.’ Written entirely in Springsteen’s hand, this early version charts the beginnings of the breakout hit.      

It is estimated to fetch $200/300,000 and will be offered in the Books and Manuscripts Online auction with bidding open from 18 – 28 June and public viewing available. After his first two albums ‘Greetings from Asbury Park, N.J.’ and ‘The Wild, the Innocent & the E Street Shuffle’ received critical acclaim but modest commercial success, the 26-year old Bruce Springsteen found his career hinging on the success of his next single. Aiming for musical perfection and Spector-level grandeur, Springfield spent six months writing and finalizing ‘Born to Run’, which clocks in at four and a half minutes long. “Born to Run” was a breakout (runaway? Too much?) smash, and became Springsteen’s first worldwide release.

The majority of the lines in this version of the song are apparently unpublished and unrecorded but the present manuscript does include a nearly perfected chorus. Captured here, perhaps for the first time, is the most powerful of any Springsteen lyric: “This town’ll rip the (out your) bones from your back / it’s a suicide trap (rap) (it’s a trap to catch the young) your dead unless / you get out (we got to) while your young so (come on! / with) take my hand cause tramps / like us baby we were born to run.” Thirty eight years later, “Born To Run” remains a beloved classic. In 2013, after nearly four decades of performing the career-defining hit, Rolling Stone Magazine ranked “Born to Run” Springsteen's greatest song, and Springsteen himself as number 1 on their 2013 list of the “50 Greatest Live Acts Right Now”.

The one-man show Springsteen On Broadway was initially planned as a eight week residency at the Walter Kerr Theater in New York. However, after opening in October 2017 exceptional demand meant Springsteen On Broadway has been extended twice most recently through December 2018. Fittingly, the news was reported by the Guardian with the headline: ‘Bruce Springsteen on Broadway: born to run ... and run.’