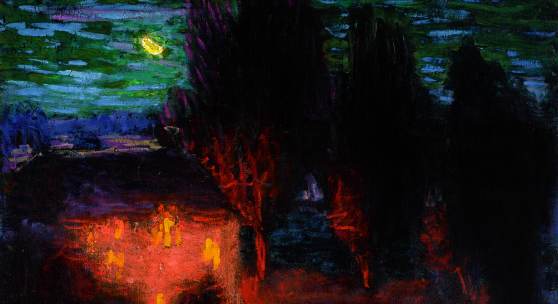 “The vibrancy of Ireland’s cultural and artistic scene has always been a cause for celebration. This year’s Irish Art sale celebrates both past and present, from legendary figures such as Jack B. Yeats, Paul Henry, William Orpen and Louis le Brocquy, to new blood from Ireland’s dynamic contemporary art scene. The heart of Irish culture is encapsulated in a diverse selection of works with subjects ranging from literary icons to immediately recognisable landscape motifs, many of them making their auction debut.” Charlie Minter, Sotheby’s Head of Irish Art

Appearing at auction for the first time in 35 years, A Paris of the West / A Paris come to Judgment in the West caused some excitement in the media when it was bought by the celebrated American theatre actress, Katharine Connell in 1948. In the painting, a boy peers up at three young women, silhouetted against a view of the sea on the Sligo coast. The title casts this unlikely character as Paris, the classical hero who was tasked with choosing who was the most beautiful of the goddesses, Hera, Venus and Athena. In this work, Yeats elevates a west of Ireland subject to the realms of antique Greek and Roman mythology, and pays homage to the grand tradition of European painting. Yeats is currently the subject of a landmark exhibition at the Irish Museum of Modern Art in Dublin, in which he is placed side-by-side with Lucian Freud for the first time in 70 years.

Making its first appearance at auction, 'The Man in the Moon has Patience' is quite possibly a self-portrait of Yeats as a young man. The painting is being offered for sale by glassware designer Simon Pearce, whose father acquired the work directly from the artist. In an expansive landscape, perhaps the Skelligs or Killary Harbour in the West, a traveller wearing a broad-rimmed hat pauses to look up at the moon which lights up the night sky before him. Painted when in his seventies, Yeats is possibly reflecting upon his own journey and acknowledging the ever-presence of the moon, patiently observing and guiding him as he finds his way.

The roots of this mysterious painting lie in the nocturnes O'Conor created during his first extended visit to Brittany. The moon has risen behind the curtain of trees, half glimpsed through patches of dark cloud whilst down below, in the foreground, a circle of figures seems to engage with a firework display or a lantern procession. Although the setting is rural and no buildings are visible, the subject is most likely observational, possibly painted en plein air, until the fading light demanded that the canvas be brought into the studio for completion.

William Orpen's oeuvre consists of many exceptional interior paintings that demonstrate his keen sense for composition, atmosphere and his aptitude for rendering decorative elements. This painting, which has remained in a private collection since 1947, richly evokes the fading glamour of the The Hall­by-the-Sea in Margate. The venue occupied a disused railway station and was turned into an entertainment complex by 'Lord' George Sanger in 1874. Today nothing of the splendid ballroom of Orpen's day still exists except perhaps the shell. Orpen picks out the ornate details of the bar with flashes of light, from the mirrors and bar taps to the flamboyant sculpture in the foreground. The artist’s presence is suggested in the long coat and hat which rest on the bar, with a bottle and glass to the left.

This superb painting by Paul Henry is emerging in the public eye for the first time in nearly a century, having been purchased by Geoffrey Thomas Taylour, 4th Marquess of Headfort and his wife, Rose, who was a celebrated 'Gaiety Girl' at the Gaiety Theatre in London. The artist’s decision to spend a fortnight's holiday in summer 1910 on the rugged Island of Achill was a momentous one – he would settle there for the next decade, enchanted by island and islanders alike. Warily christened with the nickname 'Sketcher' by Achill's inhabitants, he would rove the island in search of scenes to paint. Here, he looks south towards nearby Clare Island. Henry’s evocative light and painterly approach can be attributed to some extent to a short yet formative period spent in Paris at the turn of the century. On arriving on the west coast of Ireland, he put his Parisian education into practice, seeing the landscape with a wholly modern eye and forging an avant-garde style that was at once distinctly Irish.