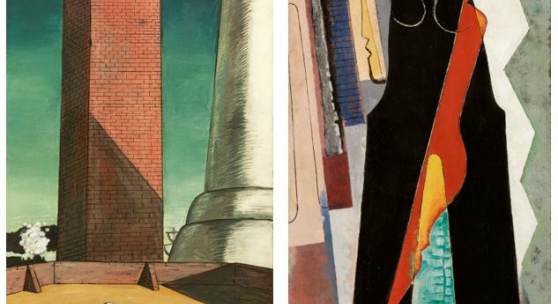 One Of The Finest Metaphysical Paintings By de Chirico Remaining in Private Hands: IL POMERIGGIO DI ARIANNA (ARIADNE'S AFTERNOON) From 1913 Is Estimated to Sell for $10/15 Million

One Of The Most Important Works By Man Ray Ever To Appear at Auction: BLACK WIDOW (NATIVITY) From 1915 Is Estimated to Achieve $5/7 Million

Dating from the pivotal year of 1913, Il Pomeriggio di Arianna (Ariadne's Afternoon) (estimate $10/15 million) is one of only eight canvases that compose Giorgio de Chirico’s earliest painted series, as well as the genesis of his celebrated metaphysical style – both a marked departure from the dominant school of Cubism subscribed to by his contemporaries and a revolution in the history of art which would fundamentally alter the Modernist identity. Of these eight canvases, which date between 1912 and 1913, five reside in museum collections, such as The Metropolitan Museum of Art in New York and the Philadelphia Museum of Art, with only three, including the present work, remaining private collections. Il Pomeriggio di Arianna (Ariadne's Afternoon) is distinguished from this limited group by its striking large-scale vertical format, and is the only example to depict the emblematic ship from the myth of Ariadne, Theseus, sailing away from the island of Naxos. Creating a world of enigma and uncertainty, verging between dreams and reality, de Chirico’s metaphysical works had a tremendous influence on the development of Surrealist theories and aesthetics. “I believe that a true modern mythology is its making. It is Giorgio de Chirico’s task to permanently establish its memory” declared André Breton. Il Pomeriggio di Arianna (Ariadne's Afternoon) was reproduced in the 1926 issue of La Révolution Surréaliste alongside text by Paul Éluard.

Emerging from Man Ray’s incredibly rare, early body of paintings from the mid-1910s, Black Widow (Nativity) (estimate $5/7 million) from 1915 was the largest and most groundbreaking work that the artist had ever painted. An iconic canvas within his oeuvre as well a significant example of Abstraction, this dazzling work displays a crucial step in the artist’s development of his style of painting on a flat, planar surface, while also advancing the tradition of working on a monumental scale. Further underscoring its tremendous importance, Black Widow (Nativity) remained in Man Ray’s collection until 1953 and is undoubtedly the most important painting by the artist to appear on the market following the 1979 sale of Observatory Time: The Lovers from the collection of famed Surrealist patron and collector, Edward James.

Lisa Dennison, Sotheby’s Chairman, Americas, commented: “It is a privilege to offer two exceptional paintings by Giorgio de Chirico and Man Ray in our marquee fall Evening Sale of Impressionist & Modern Art this October in New York. Both masterpieces are the epitome of museum-quality paintings, and provide a unique glimpse into the profound early output of these two visionary artists. Each work showcases the hallmarks of the artist, from the beguiling and enigmatic vistas of de Chirico to Man Ray’s experimentation with perspective and abstraction. Together, the works encapsulate the apex of Modernism in Europe and New York.”

Julian Dawes, Head of Sotheby’s Impressionist & Modern Art Evening Sales in New York, said: “We are honored to present these two rare and early masterworks by Giorgio de Chirico and Man Ray in our Evening Sale this October. Both works stand apart from their contemporaries and the prevailing Cubo-Futurist style of the time, and were forging new artistic boundaries that would deeply influence the Surrealist movement—underscored by their preoccupation with dream-like visuals and hard-edged geometry. As pioneering pictures that defy easy categorization, both works by de Chirico and Man Ray are quintessentially modern in their pursuit of the new, at a time when the avant-garde was continually experimenting. To present these works together at auction for the first time is to showcase an integral part of modern art history.”

On offer from the same private collection, both works are poised to establish new auction records for their respective artists. The previous benchmark price for Giorgio de Chirico was established in 2009 when Il ritornante circa 1918 from the Yves Saint Laurent and Pierre Bergé Collection achieved $14.1 million. In November 2013, Sotheby’s set the auction record for any work by Man Ray when Promenade from 1916 sold for $5.9 million in our New York Evening Sale of Impressionist & Modern Art.