The Making of Earths 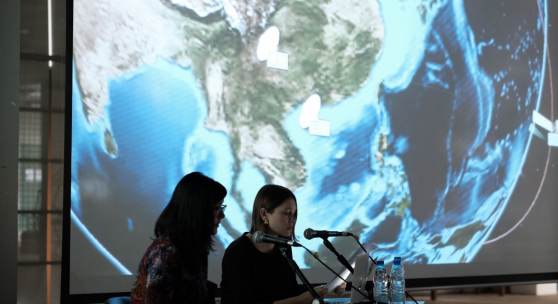 "The Making of Earths" explores the longue durée of the modern trope that the future is manageable. Following a year-long, documentary-led research, the film traces current efforts made across China and South East Asia, to predict the future of Earth’s increasingly strange climates, in shadow of ever more control on land. A chasm widens between the lived experience of overwhelming uncertainty on the ground and the mass of data collected to profit off of this instability. The film picks up on these themes and subverts the idea of knowing, instead opening up spaces of disorientation within the paranoid structure of totality.

The exhibition will also include the premiere "The Labour of Witnessing", an audio work produced in Kyiv since the onset of the Russian invasion.

The exhibition will be further viewable at the Kahan Art Space Budapest from October 6th - 29th, 2022.

Geocinema (Solveig Qu Suess, Asia Bazdyrieva) is a collective that explores the possibilities of a “planetary” notion of cinema. Their practice has been concerned with the understanding and sensing of the earth while being on the ground, enmeshed within vastly distributed processes of image and meaning making. Their work has been shown internationally, including their solo show Making of Earths (Kunsthall Trondheim, 2020), and group shows such as Critical Zones (ZKM Karlsruhe 2020-21), Re-thinking Collectivity (Guangzhou Image Triennale 2021) and Sensing Scale (Kunsthalle Muenster, 2021). Geocinema was the recipient of Digital Earth Fellowship (2018-19), was nominated for the Schering Stiftung Award for Artistic Research (2020) and the Kasseler Dokfest Golden Key Award (2021).