SPRING SUNSHINE BRINGS OUT THE BUYERS AT TEFAF MAASTRICHT 2015 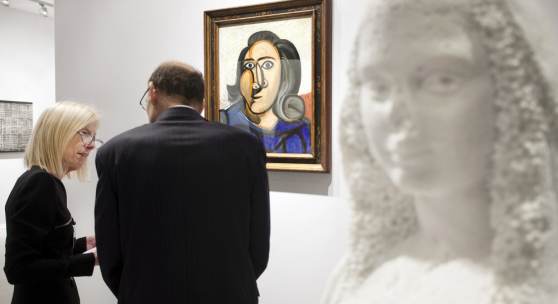 Maastricht, 15 March 2015. The preview of TEFAF Maastricht 2015 saw more than 10,000 visitors, amongst them international collectors and museum buyers, at the Fair on Thursday March 12th, while a record figure of visitors attended the opening day on Friday March 13th. Strong sales were reported both on the preview and opening day of the Fair, with collectors, whether private or institutional, keen to secure star lots in their individual collecting field. TEFAF Maastricht continues at the MECC, Maastricht until 22nd March 2015.

A new initiative for 2015, Night Fishing, a curated area designed to complement TEFAF Modern, attracted universal plaudits. Guest curated by Sydney Picasso, Night Fishing used the Post-War and Contemporary canon to re-examine sculpture and make connections with other objects at the Fair, which offers some of the best works of art currently on the market from 7,000 years of art history. The area attracted immediate interest from serious collectors and early sales included Torso Rosa (No. X. '93), painted limewood by Georg Baselitz (b. 1938), which sold for 1.4m euros.

TEFAF Modern drew many compliments for the strong presentation of the stands. Sales in the section included the catalogue piece from Applicat-Prazan (stand 444), an oil-on- canvas painting entitled Agrigente, 1954, by Nicolas de Staël (1914-1955). The Mayor Gallery (stand 453) devoted their stand to contemporary Italian work and sold Quattro ovali in giallo, 2003 by Turi Simeti (b. 1929), while Gallery Delaive (stand 532) reported an excellent fair, including the sale of a sculpture entitled Eponge Bleue, 1961, by Yves Klein (1928-1962). One of the earliest sales of the Fair was made in TEFAF Works on Paper. Francesca Antonacci/Damiano Lapiccirella Fine Art (stand 716) were delighted to report the sale of The Conquest of Tyro by Giovanni Antonio Guardi (1699-1760) within the first ten minutes of the preview opening on Thursday 12th March.   Archaic bronze bo, Early Warring States Period (475-221 BC) Vanderven Oriental Art (stand 102)

Old Masters in TEFAF paintings has long proved a magnet for collectors in the field. The Gemeente Museum, The Hague snapped up View of Amsterdam Skyline, from IJ Harbour towards the West with the tower of the Zuiderkerk in the distance painted on a September afternoon in 1854 by Camille Corot (1796-1875) from the stand of Douwes Fine Art (stand 338). The Weiss Gallery (stand 350) showcased the works of Pourbus with a special exhibition devoted to paintings by the artist and was delighted to sell a portrait of Henry IV of France (1553-1610) by Frans Pourbus the Younger (1568-1622) painted in 1610 to a new client: the painting had an asking price of 250k pounds sterling. Jack Kilgore & Co (stand 349) sold a number of works including Hector upbraiding Paris for retreating from Battle by Angelika Kauffman (1741-1807).

Reports of strong sales were received from a number of dealers selling classical antiquities. Charles Ede (stand 426) had a very good opening to the Fair selling, amongst other items, an Egyptian monumental footed bowl Romano-Egyptian Period, 1st-3rd century AD, which was bought by a private collector for a leading American institution. Rupert Wace Ancient Art (stand 421) also reported numerous sales, one of which was a catalogue piece: a bronze figure of a seated cat, Egypt, 21st-26th Dynasty 1075-525 BC. Antique jewellery is also one of TEFAF's strengths. Wartski (stand 242) was delighted to sell a good number of works by major makers including Fabergé, Giuliano and Cartier: a particular sales highlight was a carved caviar scoop by Carl Fabergé (1846-1920) made from agate, with a tapering reeded gold handle terminating in a gold sphere set with cabuchon sapphires. Works of Art sold well too. Vanderven Oriental Art (stand 102) were delighted to sell their star piece, an archaic bronze bo (a bell), Early Warring States Period (475-221 BC), to a new collector. The piece had an asking price of 1.2m euros. Regarded by many as the one of the most remarkable stands of the Fair, both visually and for the quality of the stock, Laffanour-Galerie Downtown (stand 605) created a stand devoted to Shaker material and reported numerous pieces reserved.

Around 225 delegates attended the Art Symposium on Friday 13th March, at which Dr. Clare McAndrew presented the 2015 TEFAF Art Market Report. After the report, Private goes Public: Advancing the relationship between private collectors and the public realm was the subject of the fair's fourth symposium. Following a short presentation by Sjarel Ex, director of the Boijmans van Beuningen Museum, Dr. Thomas Marks, Editor of Apollo magazine chaired a discussion between Sjarel Ex, Bernadine Bröcker, Managing Director of Vastari, an online platform for private collectors willing to lend works to museums and collector, Lieven Declerck, on the changing attitudes and opportunities for collaboration between private collectors and public institutions. TEFAF Maastricht tment to excellent, expertise and elegance. This is reflected not only in the magnificent range of rare works that are offered for sale at the Fair, which will be held in the MECC Maastricht from 13-22 March in 2015, but also in the number of art collectors, both private and institutional, that regard TEFAF as a must-see event in the art market calendar.