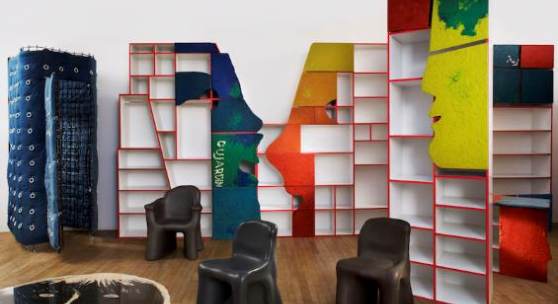 / Nine selected projects are unified by Halard’s concept centering on the lasting impact of superior design on our lives and on the world around us Basel, May 14, 2018/ Design at Large presents large-scale works of historical and contemporary design, showcasing ambitious architectural installations that surpass the scope of the traditional gallery booth. Each edition is curated by a global tastemaker, features both conceptual and industrial innovation, and is presented at the entrance to Design Miami/ Basel.

The 2018 program centers on the theme of twentieth and twenty-first century architectural expression and is organized by the celebrated photographer François Halard, known for his distinctive images of intimate spaces and their architecture. Halard has portrayed the houses, gardens, and ateliers of singular personalities around the world, including Louise Bourgeois, Luigi Ghirri, Saul Leiter, Robert Rauschenberg, and Cy Twombly, as well as such architectural masterpieces as Casa Malaparte, Capri; Villa Noailles, Hyères, France; and La Maison de Verre, Paris.

“François’s eye for detail and his encyclopedic knowledge of iconic works of art, design and architecture make him a natural collaborator for Design at Large,” says Rodman Primack, Chief Creative Officer, Design Miami/. “We could not dream up a better partner for this program.” Halard considers time to be one of his most frequent collaborators––his patience and knowledge are the key elements of his visionary work. He elaborates on this concept and his vision for Design at Large:

“Art and design have been influencing me since I was a child. My parents opened my eyes to this world and to how art, furniture, architecture, planning, the landscape and each one of its details impact the way we live. In my work as a photographer I often endeavor to capture the essence of art and design by documenting ideas that manifest in something physical, this includes the structures that define the way we live. I strive to focus on the elements that elevate our experience of living. Meaningful design is impactful and lasts, it adds so much value to the world and to our lives, it withstands the test of time, sometimes defining a moment, sometimes setting the stage for the next one.

Time is one of the essential components of my work. All of the elements that contribute to each one of the photographs are affected by it––in quite literal ways like light and exposure, where there is a second hand constantly ticking and impacting the image. I choose to work in film, which records this relationship and then again needs time to be developed and processed. I am also an absolute fan of the Polaroid, which has its own specific relationship with time and light, an instant alchemy of control and chance. I have spent a great deal of my life waiting: waiting for the clouds to pass, waiting for the proofs to arrive, waiting for the garden to be at its peak, and waiting for the letter or email confirming access to a special place. Again, time. It took fifteen years before I was able to capture the inimitable Cy Twombly in his Gaeta studio, and it was worth it.

With Design at Large and the various projects presented I am looking at how the past has influenced the now and how the now may influence the tomorrow, it is all linked. Ideas are the bedrock of art and design––will and craft makes them physical, and time is the mediator. In some of these projects we can see concepts that have defined the last fifty years of art and design as well as in other ways we may see the seeds of the cities of tomorrow, and yet only time will tell.” --François Halard

Design at Large Projects
The nine Design at Large projects are unified by Halard’s concept, which centers on the lasting impact of good design on our lives and on the world around us. Historical design continues to inform contemporary practices today, and today’s practitioners will go on to influence the future of design.

Masatoshi Izumi and Koichi Hara’s Stone Screen Tokonoma, presented by Gallery Japonesque
In Masatoshi Izumi and Koichi Hara’s Stone Screen, nature challenges architecture, refocusing our attention through the tension and communication between the two. The central element, a heavy, gravitational mass, is also a mask—an obstruction through which we cannot see. Its surface, mottled with controlled, single strokes of breakage, evokes human respect for the strength of stone. Upon approaching, we must ask, “What could be on the other side?” A hint is offered with the tokonoma: a simple projection of wood that destabilizes the symmetry of the work. The plank enables inhabitation—as a table or a bench it draws us around and into the space between the Stone Screen and the perimeter of the space in which it resides. The other side reveals the tokonoma’s support to be another stone, this time a horizontally laid anchor, regrounding the project to the site. Also on view is Hara’s déjà vu ZaZen II, a shikkui meditation space.