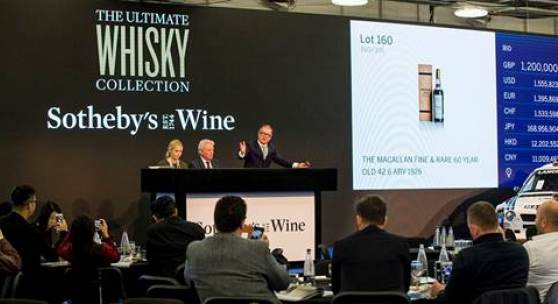 Jonny Fowle, Sotheby’s Spirits Specialist, added: “This fantastic result is testament to the quality of the collection. It was remarkable to see so many iconic bottles break records – homage to the importance of distilleries such as Bowmore, Brora, Springbank and, of course, The Macallan. The electricity in the auction room was palpable. There were cheers when the hammer fell on the Macallan Fine and Rare 1926, in one has to be one of the most exciting moments in the history of whisky sales. The final hammer dropped just in time for our friends at RM Sotheby’s to start their sale of collectible motor cars. Our clients were delighted to share their enjoyment and passion for both cars and whisky in the same space.”

KEY STATISTICS AT A GLANCE:
The Ultimate Whisky Collection totals £7,635,619 / $9,854,530 (pre-sale estimate: £3.3-4.6m / $4.3-5.9m)
Sale is 100% sold
87% of lots achieve prices above pre-sale estimates
Bidders from around the world, with pronounced interest from Asia
The most comprehensive catalogue of whisky ever to be offered by a single owner in a single auction, spanning whiskies from each of Scotland’s key whisky-producing regions: Speyside, Highland, Lowland, Islay and Campbeltown (more details here)
Full results available here

THE MACALLAN REIGNS SUPREME:
The record-breaking Macallan mentioned above was part of a 178 bottle-strong collection of the Fine and Rare series, spanning seven decades from 1926 through to 1991, which sold for a combined total of £5.1m / $6.6m – this is the most extensive collection of Macallan Fine and Rare ever to be seen at auction.
Two complete Macallan in Lalique Six Pillars Collection, offered in specially designed cabinets by James Laycock, doubled their low estimate to achieve £665,500 / $858,984 and £629,200 / $812,046 respectively.
A bespoke, hand-crafted wooden display case containing 46 bottles from the Macallan Fine and Rare miniature collection, ranging from 1937 to 1991 sparked a flurry of bids, pushing the final price over six times above the high estimate to £338,800 / $437,255. These 46 bottles represent the complete collection of miniatures in the Fine and Rare series, as the series existed when the Ultimate Whisky Collector stopped collecting them in 2018.
The four top lots of The Macallan sell for a combined total of £3m / $4m.

NEW AUCTION RECORD FOR SPRINGBANK 50 YEAR OLD 1919:
Distilled in 1919, bottled in 1970, this Springbank is undoubtedly one of the rarest whiskies ever to be released, with only 24 bottles produced and once listed in the Guinness Book of Records as the most expensive bottle of whisky ever sold.
The appearance on the market of one of these bottles caused a great deal of excitement, driving the final sale price to £266,200 / $343,558, almost double the pre-sale high estimate.
Distilled a year after the end of the First World War, at a time when distilleries throughout Scotland had ceased operations, the bottle contains a snapshot of history.
NEW AUCTION RECORD FOR BRORA LIMITED EDITION 40 YEAR OLD:
Brora’s first release to exceed 40 years, one of only 160 bottles to have been produced reached new heights, selling for a record £54,450 / $70,273, in the year of the distillery’s 200th anniversary, and just ahead of its reopening next year.
The full set of Brora Annual Releases, sold as individual bottles, achieved for a combined total of £30,129 / $38,884.

BOWMORE BECKONS BIDDERS:
Bottle number 1 of Bowmore’s “Crashing Waves”, the oldest whisky to be released from the legendary distiller after 54 long years if maturation, swelled to £363,000 / $468,488. One of only 12 ever released in a hand-blown sculpted bottle depicting the crashing waves of the Atlantic against Islay’s shores, this is arguably the finest bottle of Islay whisky ever produced.
Bottles from each of the Bowmore Black releases (First, Second, Final and Bowmore Black 50 Year Old) met with significant demand to sell for a combined total of £119,790 / $154,601.
The Bowmore Trilogy series, all of which were distilled in 1964, achieved an overall total of £62,920 / $81,205.