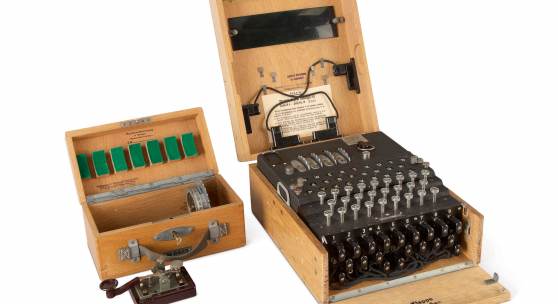 Sotheby’s third annual History of Science & Technology auction totaled $2.5 million on Tuesday, and was led by a Four-Rotor (‘M4”) Enigma Cipher Machine. Appearing at auction for the first time ever, the fully-operational Enigma M4 from 1942 achieved $800,000, setting a new world auction record for an Enigma machine and far surpassing its high estimate of $500,000. Considered the most desirable of all Enigmas and the hardest version to decrypt, the present machine is an example of the famous German Four-Rotor Kriegsmarine Enigma Cipher Machine, which were specifically developed for use by the U-boat division of the German Navy (Kriegsmarine) for communication with the naval bases. In pristine condition and with all of its working parts, the machine was one of 15 Enigma machines used at a German naval base in Trondheim, Norway during World War II. In addition to its rare status as a fully functioning Enigma machine, the M4 is particularly unique as it boasts completely traceable provenance: seized by a member of the Norwegian navy who specialized in radio and radar after the conclusion of the war, the machine was consigned to yesterday’s auction by his