Sotheby's 2019 Auctions Achieve $4.8 Billion | The Moments that Defined Our Year 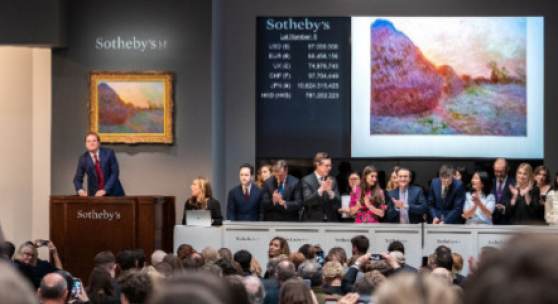 LED BY
THE TOP LOT OF THE YEAR AT ANY AUCTION HOUSE:
Claude Monet’s Meules Achieves $110.7 Million
* World Auction Record for Impressionist Art *

A RECORD YEAR FOR WATCHES
Auction Sales Top $109 Million,
Marking a 22% Increase Over 2018 &
The Highest Total in Sotheby’s History

19 DECEMBER 2019 – Sotheby’s concluded our 2019 auctions this week, reaching an annual sales total of $4.8 billion. From the sale of Claude Monet’s Meules for $110.7 million – a world auction record for Impressionist art – to the world’s most expensive sneaker, below is a look back at the major auction moments that helped define the year at Sotheby’s.

Charles Stewart, Sotheby’s CEO commented: “Our 275th anniversary marked an outstanding year for Sotheby’s, with record sales across categories and geographies. The more than 100 auctions we held over the past two months delivered particularly exceptional results that helped us end 2019 on a very high note. That energy and focus will carry us into 2020, which already promises to be an exciting year.”

JANUARY
In celebration of fearless and ground-breaking women artists of the pre-modern era, Sotheby’s Master Week sale series in New York presented The Female Triumphant: a group of masterworks by 14 trailblazing female artists from the 16th through the 19th centuries. Multiple new benchmark prices were established, most notably for Elisabeth-Louise Vigée Le Brun, whose Portrait of Muhammad Dervish Khan achieved $7.2 million – a new world auction record for any female artist of the pre-modern era.

The only complete archive of skate decks by iconic streetwear brand Supreme in private hands sold for $800,000, to Vancouver collector Carson Guo. Diligently and passionately assembled over decades, the archive comprises all 248 decks produced by Supreme over 20 years from 1998 – 2018.

FEBRUARY
Claude Monet’s Le Palais Ducal, a shimmering view of the Doge’s Palace that had remained in the same family collection since 1926, sold for £27.5 million / $36.2 million, surpassing the previous benchmark price for a Venetian view by the artist.

We celebrated our 275th anniversary on 11 March – on that date in 1744, Sotheby’s held its first sale in London at Exeter Exchange on The Strand. The auction of ‘several Hundred scarce and valuable Books in all branches of Polite Literature’ fetched a grand total of £826.

The Nobel Memorial Prize for Economic Science Awarded to Friedrich von Hayek, one of the greatest minds of the 20th-Century, achieved £1.1 million / $1.5 million – a new record for any item sold in an online-only sale at Sotheby’s to date.

MAY
An icon of Impressionism from Claude Monet’s acclaimed Haystacks series, Meules from 1890 sold for $110.7 million in our Impressionist & Modern Art Evening Sale. That result represents: an auction record for any work by Monet; the first work of Impressionist art to cross the $100 million threshold at auction; and the highest auction price of 2019.

We unveiled our newly-expanded and reimagined New York City galleries to the public. Designed in collaboration with Sotheby’s by Shohei Shigematsu, of the internationally-acclaimed architecture firm OMA New York, the redesign features vast new galleries that we designed to provide the optimal exhibition space for everything from single objects to expansive collections, and can accommodate works of art of any scale.