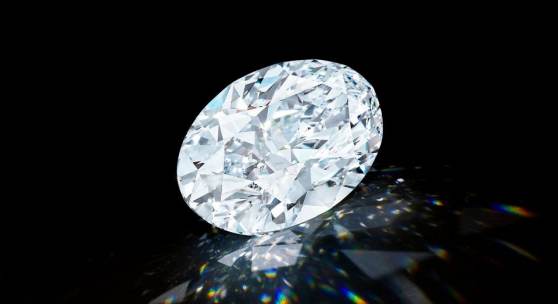 To a Private Collector Who Names the Gem ‘Maiko Star’ After His Second Daughter
The Same Collector Bought the 88.22-carat ‘Manami Star’ at
Sotheby’s in April 2019
The Diamond will be heading to Japan

Hong Kong, 5 October 2020   –  Moments ago at Sotheby’s Hong Kong, one of the earth’s rarest and most coveted wonders – a highly important 102.39-carat D Colour Flawless Oval Diamond - sold for HK$121,562,000 / US$15,694,870 in an unprecedented single-lot live auction. Offered without reserve – a first at auction for a lot of this importance and inherent value, the diamond attracted enormous interest and a flurry of bids, taking it quickly from HK$1 to well over HK$100m. Some of those bids were also placed online, the highest of which was HK$85m / US$10.97m - the highest value bid ever placed on a jewel online. The winning bid, though, came over the phone from a private collector in Japan, who, shortly after the sale, renamed the diamond the ‘Maiko Star’, after his second daughter. This now establishes a family tradition: last year, the same collector purchased another important diamond from Sotheby’s, naming it the ‘Manami Star’, after his eldest daughter.

Patti Wong, Chairman of Sotheby’s Asia, commented: “This extraordinary gem needed no help from a pre-sale estimate or reserve to reach its rightful price – just the instinctive desire of collectors to own one of the earth’s greatest treasures. We are grateful to Diacore for their trust and confidence in allowing us to offer this diamond without reserve, the result for which testifies not just to the importance of this diamond, but to the market for diamonds more broadly.”

Nir Livnat, Chairman of Diacore, said: “It has been fascinating to embark on this project. We are of course delighted with the results and the positive message the sale sends out to the market. The result is also testament to the maestria of our diamond cutters: Only eight D colour Internally Flawless or Flawless white diamonds over 100 carats ever sold at auction, six of them by Diacore.”

About the Diamond:
Perfect according to every critical criterion, this gem has achieved the highest rankings under each of the standards by which the quality of a diamond is judged (‘the four Cs’). The diamond is D colour (the highest grade for a white diamond); of exceptional clarity (it is completely flawless, both internally and externally), and has excellent polish and symmetry, the most sought-after grading for the oval shape category. This gem belongs to the rare subgroup comprising less than 2% of all gem diamonds, known as Type IIa. Diamonds in this group are the most chemically pure type of diamond and often have exceptional optical transparency.

The 102.39 diamond was cut from a 271-carat rough discovered in the Victor Mine, Ontario, Canada in 2018.  Following its discovery, the rough was cut and polished over a year by Diacore, world-leading specialists in sourcing, cutting and polishing extraordinary diamonds, to bring out its best brilliance, fire and scintillation