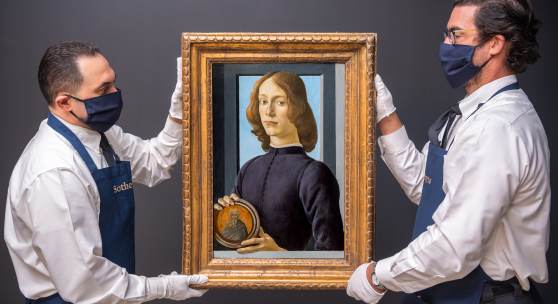 Last Purchased at Auction for $1.3 Million in 1982
NEW YORK, 28 January 2021 - One of the finest portraits ever painted by Renaissance artist Sandro Botticelli sold just now at Sotheby’s for a record $92.2 million. In a sale, still underway, that marks the first major auction event of 2021, Botticelli’s Young Man Holding a Roundel saw transatlantic bidding between Sotheby’s representatives in New York and London, with the ultimate under-bidder bidding on behalf of an Asian collector. Just one of three portraits left in private hands by this leading artist of the Italian Renaissance, known to many for his famous Primavera and Birth of Venus, the painting had attracted pre-sale interest from institutional and private buyers alike. The price achieved today makes it not only one of the most valuable portraits of any era ever sold, but also the second most valuable Old Master painting ever sold auction*. [For more on the painting, see pre-sale press release here]

Christopher Apostle, Head of Sotheby’s Old Masters Painting Department, New York, said: “This is not only an exceptional painting, it is also the epitome of beauty, and of a moment when so much of our Western civilization began. Today’s result is a fitting tribute, both to the painting itself and all that it represents.”

George Wachter, Sotheby’s Co-Chairman of Old Master Paintings Worldwide, added: “As fresh today as when he was painted 550 years ago, Botticelli’s Young Man has cast his spell over everyone who has seen him. While the price achieved is the second highest ever for an Old Master Painting, this is a work that transcends time and categories. Now we really do know the price of beauty.”

Ahead of today’s auction Portrait of a Young Man Holding a Roundel had taken a world tour, having been exhibited in London, Dubai, LA and New York, and attracting hundreds of admirers at every stop. (In just one day, some 300 people came to admire him in Sotheby’s gallery in Dubai, while in London, people formed an orderly, guideline-observant queue along New Bond Street). Similarly, while in the course of his life he has graced the walls of many illustrious private houses and public museums*, more recently, thanks to a specially-developed Augmented Reality Instagram filter made in partnership with Poplar Studio, he has also made his way into over 4,000 homes around the world.

The Botticelli now stands alongside Francis Bacon’s Inspired by the Oresteia of Aeschylus as the second work to have surpassed $80m at auction since Sotheby’s pioneered the new live-streamed auction format some seven months ago. Today’s sale also saw among the highest number of participants ever seen in a Sotheby’s live-streamed auction, with 66% having registered online. This echoes the pattern of 2020, which also saw many new buyers enter the field (c.30% of buyers in these sales were new to Sotheby’s, and a similar proportion of buyers in the category were under 40). Collectors of Old Masters also quickly embraced both livestream and online auction formats, with the category witnessing record online activity last year, with double the number of online sales compared to 2019 and more than four times the aggregate online sales total.

Today’s sale is still in progress and can be followed live here. Full results will be available at the end of the sale, but for any enquiries in the meantime, please email Derek.Parsons@Sothebys.com and Amanda.Bass@Sothebys.com

* Second only to the much-discussed Salvator Mundi, sold in 2017.