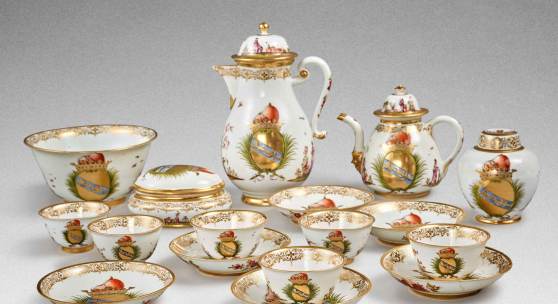 'White-Glove' Auction is 100% Sold,
With an Outstanding 97.4% of Lots Selling Above Their High Estimates

Over Quarter of All Lots Are Sold to Online Bidders

$1.4 Million Armorial Tea and Coffee Service,
Made for the Noble Morosini Family of Venice

NEW YORK, 14 September 2021 – This morning, Sotheby's auction dedicated to one of the greatest pre-war collections of Meissen porcelain to appear at auction in more than half a century achieved a remarkable $15 million – shattering its $3.1 million high estimate. Prolonged and spirited bidding from clients participating online, over the phone and in the room drove 97.4% of lots above their high estimates, with all 117 lots sold. In addition, more than half of collection was acquired by the Rijksmuseum in Amsterdam, where many of the pieces were displayed for over 60 years, before they were restituted to the Oppenheimers' heirs earlier this year.

The 'white-glove' sale was led by a magnificent Highly Important Documentary and Dated Meissen Mantel Clock Case from 1727, which achieved $1.6 million (estimate $200/400,000). Undoubtedly the rarest piece in the Oppenheimer collection and illustrative of the Chinoiserie style they so loved, the clock is among the most ambitious and successful of sculptural models produced at the factory at this early date, and one of only five clocks of this model that appear to have survived by the early 20th century, each with slight variations in the modeling, rendering all of them unique. Of the five, only three examples now survive.

Additional highlights included: a Rare Meissen Armorial Tea and Coffee Service, made for the noble Morosini family of Venice, which realized $ 1.4 million (estimate $120/180,000); an Extremely Rare Meissen Famille Verte Goblet – one of only five or six pieces of Meissen porcelain painted in this distinctive style that appear to be recorded – that soared past its $70,000 high estimate to achieve $1.1 million; and an Extremely Rare Pair of Meissen Augustus Rex Underglaze-Blue-Ground Beaker Vases, which sold for $1.2 million (estimate $80/120,000). Another pair of Underglaze Blue-Ground Beaker Vases achieved $867,000 (estimate $70/100,000).

Meticulously assembled by Dr. Franz and Margarethe Oppenheimer in Berlin in the early decades of the 20th century, the exquisite collection is among the most significant ensembles of early 18th century Meissen porcelain from Europe’s first porcelain manufactory – many of which are distinguished by illustrious royal and noble provenance, including pieces from the collection of Augustus the Strong, Elector of Saxony and King of Poland, and founder of the Meissen porcelain factory.

Following their persecution by the Nazis due to their Jewish heritage, Franz and Margarethe Oppenheimer fled to Austria in December 1936 not knowing that their refuge would come under Nazi control after the Anschluss in March 1938. Eventually they found their way to exile in New York in December 1941. As a result of their persecution, the couple was forced to part with their magnificent collection. Their Meissen changed hands several times during World War II, and after its recovery by Allied Monuments Officers it was entrusted to the Dutch State, which allocated it to three distinguished museums in the Netherlands: the Rijksmuseum in Amsterdam, the Kunstmuseum Den Haag in The Hague, and the Museum Boijmans Van Beuningen in Rotterdam, before being restituted to the Oppenheimers’ heirs in 2021.