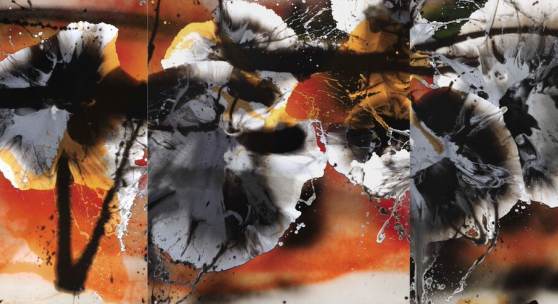 Sotheby’s Hong Kong is delighted to present a robust schedule of paintings and calligraphy this April. Ranging from fine classical Chinese paintings to modern and contemporary South Asian Art, the season’s offerings include significant works from the 14th through the 20th Century. In particular, the Modern & Contemporary Art Evening Sale will feature, for the first time, Western Contemporary works in a Hong Kong evening sale. Exhibitions at the Hong Kong Convention and Exhibition Centre open to the public on 31 March, with auctions beginning on 1 April 2017.

Opening this spring’s Evening Sale, BRUSHWORK II – ALL THE WORLD’S A STAGE celebrates the newly globalized and interconnected post-war arena in which artists painted for the world – not just for local audiences. In their cross-cultural search for a common international language on the global ‘stage’ of abstraction, artists turned to performances, process, and dynamic synthesis of East and West.

Sotheby’s Hong Kong’s Modern and Contemporary Southeast Asian Art Spring Sales 2017 will take place on 2–3 April at the Hong Kong Convention and Exhibition Centre. More than 185 lots with a total estimate of approximately HK$70 million / US$8.9 million* will be offered in the Modern and Contemporary Asian Art Evening Sale (2 April) and Modern and Contemporary Southeast Asian Art Sale (3 April). The evening sale (separate release available) highlights paintings by internationally-renowned artists such as Andy Warhol, Jean-Michel Basquiat, Damien Hirst and Adrian Ghenie, together with works by other in-demand Asian artists including Lin Fengmian, Zao Wou-ki, Zhang Xiaogang, Liu Ye, Kusama Yayoi, Le Pho and Affandi, while the day sale is highlighted by exceptional and rare pieces from Southeast Asian leading artists and a selection of works from new-to-auction and emerging artists.

Led by classical Chinese paintings and calligraphy from celebrated private collections including the Mo Boji Family Collection and Si Wei Tang, the Classical Chinese Paintings spring sale will take place on 3 April at Hall 5, Hong Kong Convention Centre. Among the highlights of the sale are Landscapes by Shitao, previously from the Collection of Wu Hufan, Landscape after Huang Gongwang by Wang Yuanqi and Geese on the Waterfront by Ma Ben.

‘Yamaguchi Takeo – Composing Monochrome’ pays respect to one of the most iconic and pioneering artists of the twentieth century. An important mentor of Lee Ufan who provided both financial and artistic support to Kim Whanki as well as countless Japanese students in the post-war period, Yamaguchi Takeo single-handedly composed a one-man monochrome symphony that heralded the 1970s wave of monochrome artists in Asia. His distinctive paintings were shown at the São Paolo and Venice Biennales, the Solomon R. Guggenheim Museum, and the Museum of Modern Art, New York as early as the 1950s and 1960s. The present sale offers works spanning six decades, tracing the elegant evolution of a trailblazing legacy.

Estimated at approximately HK$160 million / US$20 million, Fine Chinese Paintings features a number of specially-curated thematic sections, such as an array of paintings and calligraphy previously from the collection of Wu Hufan, along with works of Wu and his students, and the collection of celebrated Guangdong book collector Mo Boji. Further highlights include masterpieces by Zhang Daqian, many of which were gifts to his close friends, such as the splashed ink and colour landscape on gold paper for Tai Jingnong, a splashed ink lotus painting for Wu Hufan to celebrate his 70th birthday, and red lotuses for his friend Mao Yingchu.

Presenting more than 70 lots, Contemporary Ink Art is led by an especially rare group of paintings by Liu Dan that features a range of signature motifs by the contemporary literatus. Works on offer focus on significant moments and artistic milestones for pioneers of contemporary ink art working around the world, from the experimental calligraphy works by Bokujinkai leaders in 1950s post-war Japan, to important landscapes by such early masters as Lui Shoukwan and Liu Guosong, to a subsequent generation of artists including Li Jin, Xu Lei, Qiu Deshu and Peng Jian, who seek to address social issues in their pivotal works.