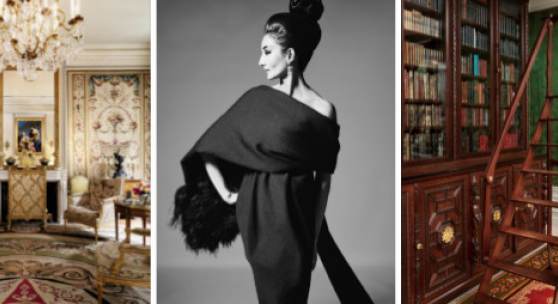 PARIS, 13 November 2019 – The name “de Ribes” resonates internationally with a timeless sense of style – the essence of French chic and elegance. On 11 and 12 December, Sotheby’s Paris will offer for sale a selection of historical pieces from the collection of the Count and Countess de Ribes. Held over two sessions, the auction will present artworks, fine books and manuscripts from the family’s ancestral home in Paris – covering three centuries of French history.

In the exquisite setting of their “Hotel Particulier”, built in 1865, Edouard de Ribes and his wife Jacqueline, née de Beaumont, were custodians of an exquisite collection of objects that had entered the family in the 18th century. They were also keen collectors, acquiring works of the highest-quality to enhance the sumptuous and sophisticated décor of their mansion. The Count and Countess were recognised as respected patrons in the art world, and the intellectual and artistic elite would gather at their home for parties that encapsulated the French “art de vivre”. In line with this, part of the proceeds from the sale will benefit philanthropic causes and cultural organisations.

The first auction will be dedicated to the “treasures” of the collection – exceptional pieces boasting remarkable provenance that have been passed down through the ages by distinguished historical figures. Famed previous owners include Louis XIV and XV at the Château de Versailles, Louis XVI at the Château de Saint-Cloud, the Count of Artois at the Palais du Temple, Marie-Antoinette and the Duke of Orléans. Eminent figures from the decorative and fine arts are represented, including Élisabeth Vigée Le Brun, Hubert Robert, André-Charles Boulle and Bernard II Vanrisamburgh.

The second sale is a sanctuary for fine books, featuring precious volumes from the 16th to the 21st centuries. Built up by two generations of bibliophiles, Édouard de Ribes (1923-2013) and his father Jean (1893-1982) – both members of the prestigious Société des Bibliophiles François – the exceptionally diverse library has only been seen by a few select visitors until now.