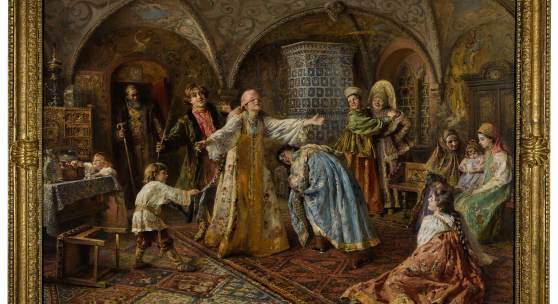 London, 29 November 2018: This week’s Russian Art sales at Sotheby’s concluded yesterday realising a combined total of $29.4 million (£23 million). Strong results were achieved across all three sales, each realising totals above their pre-sale estimates.

Mark Poltimore, Sotheby’s Chairman of Russia, said: “I am absolutely thrilled with the outstanding results we have achieved in the last two days. We had some remarkable and varied property on offer this season, which I think really captured the imagination of collectors from around the world. Having championed this category for so long, we are absolutely delighted to be ending the year on such a high note.”

Reto Barmettler, Head of the Russian Pictures sale said: “There was a lot of activity, particularly at the top end of the market, with exceptional prices which surpassed their estimates. From 19th- century masterpieces such as Blind Man's Bluff by Makovsky to early 20th-century works such as the Pirosmani, paintings from across various categories performed extremely well.”

Leading the Russian Works of Art, Fabergé and Icons sale were spectacular silver-gilt and cloisonné enamel decorative arts crafted by goldsmith, Feodor Rückert, with the top lot of the sale, a monumental kovsch, selling for $624,946 (£490,000) - eight times its estimate. Further highlights of the sale, which totalled $6.9 million (£5.4 million), included Russian portrait miniatures from the collection of Dr Erika Pohl-Ströher. Amassed over forty years, the collection is one of the most important private collections of portrait miniatures ever created and featured a number of works of the Russian Imperial family. A portrait by Vladimir Borovikovsky of Count Alexei Ivanovich, who served under Tsar Alexander I, sold for $135,511 (£106,250) over an estimate of $6,500-10,400 (£5,000-8,000).

The week’s Russian sales culminated in the auction of the private collection of Mstislav Rostropovich and Galina Vishneskaya which totalled $5.3 million (£4.2 million). Following the private sale of the Rostropovich-Vishneskaya art collection in 2007, yesterday’s auction offered a more intimate and unprecedented look into the lives and loves of the renowned musical couple. The sale was led by the masterful 1783 Guadagnini cello which achieved $2.4 million (£1.9 million), marking the first time one of the maestro’s personal musical instruments was sold. Jewellery belonging to Vishnevskaya also proved popular, with her Cartier emerald and diamond ring ($191,370/ £150,000) and an emerald and diamond pendent necklace ($111,632 /£87,500) attracting competitive bidding.

Jo Vickery, Sotheby’s International Director of Russian Art and Head of the Sale, said: “We are thrilled with the strong results in the Rostropovich & Vishnevskaya Sale with over 80% of lots selling. Buyers from all over the world, notably Asia, the UK, Europe and Russia came together to buy up a piece of this legendary couple’s collection. Two of the cellos made world auction records and the best result of the day was for the Guadagnini cello, which sold to a round of applause in the saleroom for $2.4 million, demonstrating unprecedented demand for this rare and sought-after Italian maker. We saw particularly fierce competition for early Russian silver and enamels and among Galina Vishenvskaya’s jewellery the 50th Anniversary emerald and diamond necklace sold to a private collector for over $100,000.”