In an Indian Garden: An Auction Dedicated to 'Company School' Paintings 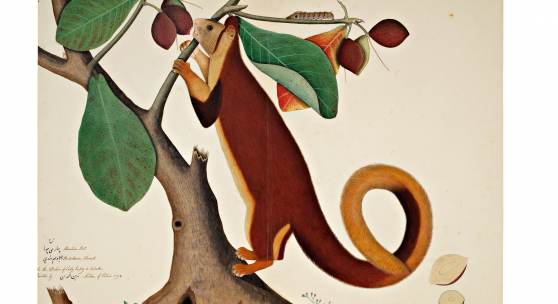 Exhibitions in New York, Hong Kong & London Ahead of First-of-its-Kind Auction on 27 October 2021
This October, Sotheby’s will hold the first auction dedicated solely to Company School Paintings, the work of Indian master artists who were commissioned by East India Company officials in the 18th and 19th centuries. Ranging in their subject matter from individual animal and human studies to complex architectural panoramas, together the remarkable corpus of paintings encapsulates on paper the rich fauna, flora and architecture of the Subcontinent.

The works in the auction are being offered by the American collector and esteemed art dealer Carlton C. Rochell, Jr. Rochell spent the first 18 years of his career at Sotheby's, where he founded the Indian and Southeast Asian Art Department in 1988. He was on the Board of Directors and served as Managing Director of Sotheby’s Asia. In 2002, Rochell opened his own gallery in New York.

Prior to the stand-alone auction in London on 27 October, highlights of In an Indian Garden will go on view in Sotheby’s galleries in New York (17-20 September), Hong Kong (7-11 October) and London (22-26 October).

In 2019 and 2020, The Wallace Collection presented Forgotten Masters: Indian Painting for the East India Company, curated by renowned writer and historian William Dalrymple. The ground-breaking exhibition brought to the fore the names of some of the finest Indian painters working on paper during the late Mughal period – introducing the public to the names of these truly great artists.

Many of those same names – Shaykh Zayn al-Din, Ram Das, Bhawani Das and Ghulam Ali Khan – are represented in the In an Indian Garden auction, with seven of the works having been loaned to the Wallace Collection exhibition. Most of the others have never been on public view and are emerging for the first time in decades.

“I first began to collect these lesser-known masterpieces over two decades ago simply for my personal enjoyment, my imagination having been captured by their “East meets West” aesthetic. When they were painted, these works were the principal way in which India could be revealed to those in Great Britain, who otherwise could only hear stories about this sumptuous land. The meticulous “miniature” style was scaled up to depict birds, animals and botanical studies with remarkable lifelike detail, with the results rivalling any Western artists who recorded natural history and travel. Many years on, as they are beginning to take their rightful place in world art, these pieces can now inspire a new generation of collectors who I hope will cherish them as I have.” Carlton C. Rochell, Jr.

“This remarkable collection contains quite simply some of the great masterpieces of Indian painting, brought together by a collector with an incredibly fine eye. This is a unique opportunity to purchase some of the greatest masterpieces of a genre that is only now beginning to receive its full credit.” William Dalrymple, Writer & Historian Curator of Forgotten Masters

“These delightful paintings reflect a fascination and passion for India’s culture and history, from Lucknow to Calcutta to Delhi and Agra, and showcase a remarkable hybrid style merging Mughal and European elements. Both the patronage and the painters provide a great deal of interest to viewers, no more so than now, when this genre of painting is finally receiving the full attention it deserves. These works are the product of true collaboration – not grand portraits of the patrons themselves, but tableaux of everyday human activity, as well as meticulous studies of nature and vernacular architecture.”

Benedict Carter, Sotheby’s Head of Sale
The In An Indian Garden auction features many works from the most renowned series of Company School paintings, including albums commissioned by Sir Elijah and Lady Impey, the Fraser brothers, Viscount Valentia and Major General Claude Martin. The most famous is that of the Impey family, who created an enchanting menagerie of animals in their gardens in Calcutta and hired local artists to paint the surrounds, with more than half of their over 300-strong collection depicting birds. The Impey Collection was sold at auction in London in 1810, with several pieces held in international institutions, including The Metropolitan Museum of Art in New York – with a similar dramatic image of the Great Indian Fruit Bat – and the Victoria and Albert Museum in London. Perhaps the person who sparked the fashion for such commissions was merchant, soldier, architect, hot air balloonist and collector Major General Claude Martin, and the sale offers a Lesser Adjutant Stork from his collection, which survives as a masterpiece of the genre.

From these beginnings, the works then passed through such hands as those of Jacqueline Kennedy Onassis, who for many years owned the arresting study of a Stork Eating a Snail, renowned South Asian paintings collector Edwin Binney 3rd, leading scholar and curator Stuart Cary Welch and former United States Ambassador to Morocco, The Hon. Joseph Verner Reed, Jr.