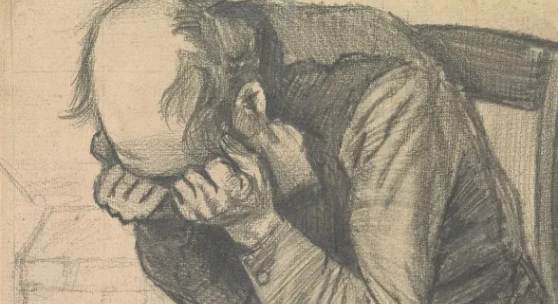 The Van Gogh Museum has discovered a new work by Vincent van Gogh: Study for ‘Worn Out’ from 1882.

Emilie Gordenker (Director of the Van Gogh Museum): ‘As a knowledge centre dedicated to the work of Vincent van Gogh and his contemporaries, we’re delighted with this discovery, with which we’ve again done justice to our specialist field. It’s quite rare for a new work to be attributed to Van Gogh. We’re proud to be able to share this early drawing and its story with visitors to our museum.’

Study for ‘Worn Out’ is a preliminary study for the 1882 drawing Worn out, one of the most powerful figure drawings from Van Gogh’s period in The Hague. The artist described in detail how the drawing came about in letters to his brother Theo and to his friend Anthon van Rappard. The discovery of the no less impressive Study, means we now have an exceptional insight into this working process.

Concern for the socially disadvantaged
Study for ‘Worn out’ shows a man sitting exhausted on a simple chair with his head in his hands. The model for the drawing appears regularly in the work of Van Gogh, who drew the bald, elderly man more than forty times. In drawings like these, the artist not only displayed his sympathy for the socially disadvantaged – no way inferior in his eyes to the well-to-do bourgeoisie– he actively called attention to them too.

Expressive drawing style
The owner of the work, who prefers to remain anonymous, asked the museum to determine whether the drawing was actually made by Van Gogh.

Teio Meedendorp (Senior Researcher, Van Gogh Museum): ‘In stylistic terms, it slots perfectly into the many figure studies we know from Van Gogh’s time in The Hague and the connection with Worn Out is obvious. The artist began by drawing a grid on the paper, which tells us that he worked with a perspective frame to help him capture a figure quickly with the correct proportions. He then worked the sheet up in his characteristically expressive drawing style: not refined, but with energetic scratches and strokes and laying down contours, in search of a pithy image with special attention to effects of light and shade.’

Meedendorp: ‘In terms of the materials, too, you find everything you’d expect in a Van Gogh drawing from this period: a thick carpenter’s pencil as medium, coarse watercolour paper as support, and fixing with a solution of water and milk. There are traces of damage in the corners on the back of the drawing, which we can link to the way Van Gogh customarily attached sheets of paper to his drawing board using wads of starch.

On show at the Van Gogh Museum
Study for ‘Worn Out’ will be displayed on the first floor of the Van Gogh Museum’s permanent collection from tomorrow until 2 January 2022. Visitors will be able to view the drawing in the context of other works by Van Gogh from the same period (all of them from the Van Gogh Museum collection), including the drawing Worn out itself.   Meedendorp: ‘Showing Study for ‘Worn Out’ in the context of these other works, offers us a special insight into Van Gogh’s working process. What’s more, the study is a very fine, powerful drawing, which stands up entirely on its own.’