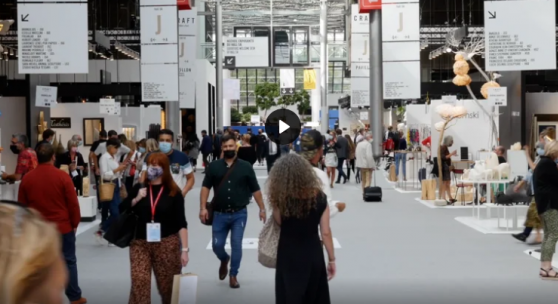 Maison&Objet rises to the challenge:the September edition fulfils all its promises,paving the way for an even more ambitious future

As the Maison&Objet trade fair closed its doors on Monday, exhibitors and visitors alike were seen leaving the Paris-Nord Villepinte Exhibition centre with smiles on their faces. Following 15 long months of being deprived of in-person events, industry professionals from thehome decor, design,craftsand lifestyle sectorswere finally able to get together once more and prepare their year-end orders and projects in style. Despite this return to the real-world event being hampered by travel restrictions affecting not onlythe world’s largest export markets but the United Kingdom, too, not to mention a tangible fear of seeing industry events being cancelled yet again, the attendance figures and transaction volumes actually exceeded all participants’expectations.

A scaled-down edition but results that exceeded expectationsThe ongoing pandemic may have led to a decline in the number of exhibitors, but visitor numbers actually showed an extremely positive trend, with over 48,000 buyers in attendance. Whilst it would have been easy to assume that this edition would be overwhelminglyFrench, 28% of visitors actually came from abroad. They included over 500 professionals from America, a group exhibitors were especially impatient to see. On top of that, there was a particularly dynamic mindset, with all those present visibly keen to see business get back on track, resulting in buzzing stands and busy aisles throughout the 5-day event. The health and safety measures that had been drawn up and widely shared by the organisers in the run-up to the event were seamlessly followed by exhibitors and visitors alike, and all the entrances remained blissfully free of bottlenecks and other such problems.

Enthusiastic brandsA number of exhibitors took to social media to makeit known just how successful the trade fair had been for their businesses. After seemingly endless months of nothing but virtual encounters, many pointed to the pertinence of in-person engagement and how crucial it was for anyone working in the decorationand design sector to be able to discover and actually touch and feel new collections. The desire and inclination to reconnect in person were, indeed, palpable in the aisles. Exhibitors were able to revel in the satisfaction of seeing their order books rapidly fill, with average sales values even exceeding those of previous editions, whilst clients were finally able to get up close and personal with products, which all points to business picking up. Enthusiasm amongst specifiers was notably apparent in theWORK! and PROJECTSsectors, which primarily focused on the innovations now available within these two markets that have been booming for a number of months. The positive energy rippled out beyond the walls of the Paris-Nord VillepinteExhibition centre and right into the heart of the city via Paris Design Week, which captured the Maison&Objetmindset more than ever before. Featuring almost 300 installations of a quality never previously seen, the 2021 edition galvanised support from a record number of players from the Parisian design, craftsand lifestyle scene, ranging from the most promising rising talents to the most highly acclaimedinteriordesigners, much to the delight of industry professionals and design lovers alike.

The innovative Maison&Objet mindset The September edition also gave everyone the opportunity to discover Maison&Objet’s most recent project, the Maison&Objet Academy. This streaming channel, available on subscription, serves up a range of content for industry professionals, giving them access to training, inspiration, and the chance to explore all the exciting new finds and previously undiscovered gems unearthed by the trade fair’s experts. The Academy’s Studio, which had set up its studioin the very heart of the event, created content to upload to the channel as soon as the fair drew to a close. This exciting new project is the direct result of the efforts the Maison&Objet organisers made throughout the pandemic to optimise the digital offering via the MOM digital platform (Maison&Objet and More). The work they did to help brands launch their collections at specific times and underpinned by specific themes met with enormous success, but it was the popularity of inspiring content and onlinetraining opportunities that encouraged the Maison&Objet teams to add this new string to their bow, with the Academy. We are consequently witnessing the trade fair strike a new balance as a media in its own right, offering the full package of exceptionallyeffective physical and digital tools.


Maison Objet Decoration, design and lifestyle, your source of inspiration and novelties
SAFI