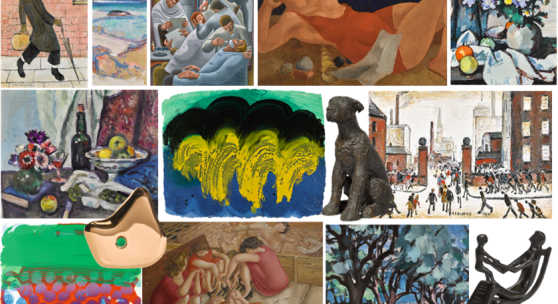 Melica Khansari | Melica.Khansari@Sothebys.com | +44 (0) 207 293 6000 Modern & Post-War British Art Sotheby’s London May 2018     Showcasing Spectacular Works by Britain’s Most Pioneering Artists From Prestigious Private Collections Evening Auction: 12 June 2018 │ Day Auction: 13 June 2018 MASTERPIECES OF MID-CENTURY MODERNISM Dame Barbara Hepworth, Spiral, white alabaster, 1959 (est. £1,200,000-1,800,000) d  ‘The strokes of the hammer on the chisel should be in time with your heartbeat. You breathe easily. The whole of your body is involved.’  Barbara Hepworth was one of the most forward-thinking artists of her generation – achieving an international reputation that no other female British artist had matched. This lustrous, translucent sculpture, celebrating the primordial, struck a personal chord with the artist who cherished the piece in her studio long after its initial conception.

Throughout Hepworth’s sculptural journey,
direct carving in stone was the method and material that best allowed her to achieve her artistic aims. The importance of the artist’s hand remained central to Hepworth’s approach, as she forbade the use of any mechanical tools in her studios preferring the labour-intensive but age- old chisel and hammer. This echoed her idea of allowing the nature of the chosen material to dictate the final form of the work. Henry Moore, Rocking Chair No. 2, bronze, 1950 (est. £800,000-1,200,000)  ‘The rocking chair sculptures were done for my daughter Mary, as toys which actually rock” Henry Moore’s Rocking Chairs are the most personal sculptures of his output, having been made with his daughter Mary in mind. An only child, Mary was born in 1946 after sixteen years of marriage and was doted on by Moore. The Rocking Chair bronzes in this series capture a heart-felt intimacy between mother and baby, and the great sense of joy and delight that parenthood brings, and clearly brought for Moore and his wife. The work lacks any sense of formality, with a naturalistically rendered child balancing precariously on the knees of their mother, whose strikingly beautiful silhouette with gently curling ringlets are reminiscent of those of Moore’s wife Irina. Thus these works offers a fascinating autobiographical insight into the life of one of the most important sculptors of the past century, with this example being offered at auction for the first time, having remained in a family collection since it was acquired before 1962.  Also appearing at auction is the intricate original plaster for the third of the four rocking chairs (illustrated right, est. £80,000 – 120,000) – an extremely rare instance of these early plaster carvings appearing on the open market.

Ben Nicholson, 1966 (Ios), oil on carved hardboard (est. £700,000-1,000,000) ‘The reliefs are what I’d choose to stand or fall by...’ Monumental and magnificent, 1966 (Ios) is a work of immense confidence and self-assurance, a masterpiece borne of maturity but with its roots in Ben Nicholson’s early practice. In  1957, Nicholson met married the young German photographer Felicitas Vogler and the following year they moved to Brissago in Switzerland overlooking Lake Maggiore. The marriage and move proved a catalyst for a renewed sense of purpose and and  productivity resulting in series of ambitious large-scale reliefs, including 1966 (Ios), which is appearing in public for the first time since it was purchased in 1971. a  Ben Nicholson, 1940 (gouache), gouache and pencil on card (est. £60,000 – 80,000) Spanning four decades of work by Nicholson, the sale also includes an early 1940s gouache, which set the artist within the heart of British Modernism, through to a series of drawings extending into the 1970s.

Patrick Caulfield, Red, White and Black Still Life, acrylic on board, 1966/84 (est. £300,000- 500,000)  is a perfect example of Patrick Caulfield’s sophisticated images of metropolitan life. The bottle represents conviviality and conversation, whilst allowing the artist to play complicated games in his characteristic graphic style of illustration, infused with ideas of Cubism and Purism. Easy to Red, White and Black Still Life read yet complex rendering of space, flatness and depth, solidity and transparency, the work reflects fellow artist Howard Hodgkin’s declaration that Caulfield was ‘such a connoisseur of spaces where people gather for pleasure’. Two of the greatest colourists in post-war British art, Hodgkin and Caulfield’s methods contrasted yet complemented each other, as Hodgkin worked with gestural sweeps of paint whilst Caulfield opted for flat and controlled hues. in its The painting remained in the collection of Caulfield’s family, and continued to fascinate the artist long after he conceived it, as he looked at it every day whilst sitting at the table beneath it to eat, talk and share a bottle of wine. In fact, he re-worked it in 1984, transforming what had originally been a red and a black bottle into a single red bottle with a black shadow.