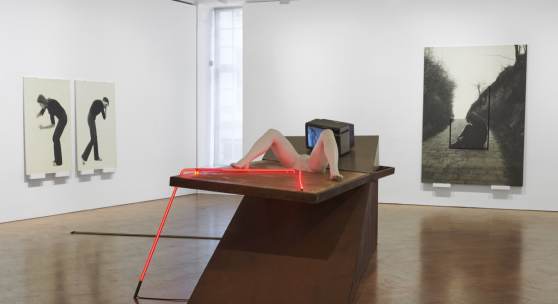 This autumn we will celebrate 30 years of activity at our Parisian gallery with an exhibition reuniting new and historical works from a focused selection of gallery artists in our Pantin space. The group show will open on 21 October, the very same day we inaugurated our first gallery in Paris in 1990.

At the time, the inaugural exhibition Vertigo curated by Christian Leigh presented cutting-edge American art at the intersection between cinema and art to a European audience, reflecting the main focus of the gallery’s first decade since its foundation in Salzburg in 1983. The provocative sense of Vertigo, a conceptual show comprising works by Peter Halley, Jeff Koons and Sturtevant among others, was described by critic Jerry Saltz as ‘a loss of faith in your own eye, in your own sense of reality’ and charted the course for the gallery programme in Paris, which has broadened its scope over the intervening years.

The last 30 years in Paris have been incredibly inspiring, challenging, rewarding and, most importantly, particularly stimulating for the artists. I feel very privileged to have worked with many great artists, and I am deeply grateful to them for offering us exhibitions that have become legendary. It has been a joy to evolve in a cosmopolitan city that embraces art and culture with an intense international resonance. From the first day in October 1990 when I opened my one-floor gallery in the Marais, I felt embraced and welcomed by a very unique Parisian art world that offered us the ideal ecosystem to present works by a very wide range of artists to a curious, enthusiastic and discerning audience. — Thaddaeus Ropac

During the last 30 years, a large number of galleries have settled in the Marais, not far from our space - a former car mechanic turned T-shirt factory - which has gradually grown to span four floors. In the wake of an increasingly dynamic Parisian art scene, the gallery decided to open a second, much larger space just outside Paris, in a former boiler factory in Pantin. This gallery was inaugurated in 2012 with exhibitions by Anselm Kiefer and Joseph Beuys, and allows for site-specific exhibitions on an expansive scale.

The anniversary exhibition 30 Years aims to reflect the development of our gallery programme across the years. This presentation brings together artists from different generations, artistic movements and cultural backgrounds: historical works by Joseph Beuys, Rosemarie Castoro, VALIE EXPORT, Donald Judd, Robert Rauschenberg and Sturtevant will be shown alongside the most recent paintings by Georg Baselitz, Alvaro Barrington, Anselm Kiefer, Elizabeth Peyton and Yan Pei-Ming, among others. While artists such as Ali Banisadr, Adrian Ghenie, Robert Longo and Daniel Richter will contribute new works conceived especially for the occasion, historical installations such as Geburtenbett [Birth Bed] by VALIE EXPORT, first presented in the Austrian Pavilion at the Venice Biennale in 1980, will be placed in dialogue with Lee Bul’s Scale of Tongue, which was presented at the Biennale last year. Both installations will be shown in Paris for the first time.

The large variety of works presented in this anniversary exhibition establishes a dialogue between different artistic positions and offers the audience a new perspective on the diversity of our current program within the vibrant artistic landscape of the city of Paris.