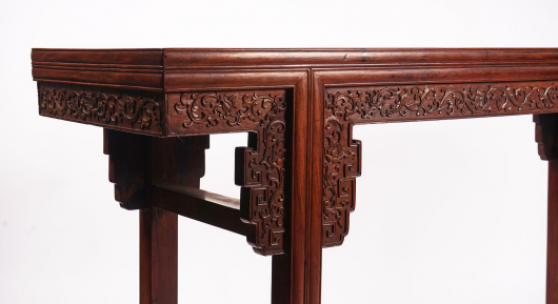 Bellmans reports great results from this week's Asian Art auction. A Chinese Hardwood Altar Table sold to the successful bidder on the phone for £278,080 including buyer's premium (estimate £1,000 - £1,500). The saleroom saw a real bidding frenzy with ten bidders in the room and another six on the phone. Bidders from Hong Kong and China who were on the phone, battled it out with the eventual successful bid from the mainland.

The table had been part of the local vendor's family collection for many years. Philip Belcher, managing director of Bellmans says: "The vendor is absolutely thrilled by the rather unexpected result. The table had been an heirloom, but it had never been pointed out to him that it may be of particular importance. The ever-growing market in Chinese Antiques means that regional auction houses are still in the position to bring completely fresh objects from local British collectors to the world market." Made from Huanghuali wood, the table is likely to have been an Imperial Commission and as such a desirable piece Chinese collectors would covet.

Another 19th Century Chinese hardwood low altar table sold above estimate at £1,200, putting into perspective how some rare works are still achieving prices beyond general expectations.

Top lot of the Asian Ceramics auction was a Chinese blue and white YenYen vase which sold for £12,640 against an estimate of £2,000 - £3,000 to a bidder on the phone. From the Kangxi period, the body was painted with a continuous scene of a crane perched in a pine tree, another in flight above two standing deer and the waisted neck of the vase showing similar designs.

There was keen interest in Chinese flambe-glazed wares with a large vase selling for more than three times its high estimate at £2,780 and a smaller, more slender vase for £2,022. A small tea dust glazed vase sold for £1,390 (against an estimate of £100 - £150), while a crackle glazed Celadon shallow bowl sold for ten times its low estimate at £1,000 hammer price. A rare Huanghuali brush pot from the Quing Dynasty made out of wood achieved £1,643, almost twice its low estimate. Estimated at £1,000 - £2,000, a pair of Chinese blue and white 'Three Friends' bowls made £6,067. A stunning Chinese Export gilt and black lacquer games box from the early 19th century reached four times its low estimate when the octagonal object with its figurative panels sold for £2,022. Asian textiles were keenly contested, with the highlight, a Tibetan Mandala Thangka on cloth from around the 18th/19th century, selling for £2,780 (estimate £200 - £300) to a bidder on the 'Bellmans Live'

platform. A Chinese blue-ground robe with nine silver-coloured dragons, set amid cloud scrolls and auspicious emblems, from the late 19th/ early 20th Century sold to a telephone bidder in China for £2,149 against an estimate of £1,000 - £1,500. While a Chinese Mandarin hat with peacock feathers, once belonging to a Third Rank official, reached £822, over twice its top estimate, and two embroidered silk apron skirts achieved £607. The hammer for five Chinese paintings on silk came down at £1,770 against an estimate of £300 - £500 and an unusual 'Mandarin' Necklace from circa 1930 made £2,780, originally estimated at £100 - £150.

Prices include the buyer's premium, unless otherwise stated. Bellmans will be holding an Asian Ceramics and Works of Art Valuation Day at its West Sussex auction room on Thursday, 26th August from 9.30 am to 4.30 pm.

www.bellmans.co.uk. Bellmans next auctions are from the 7th to 10th September. Please contact Bellmans, if you would like to consign any items for future auctions.


Chinese Hardwood Altar Table sold to the successful bidder on the phone for £278,080 including buyer's premium (estimate £1,000 - £1,500).
Bellmans Auctioneers